Lookout Mountain cyclists are fortunate to ride through the habitats of many Colorado wildlife species. Species observed (see list) by cyclists range from some of Colorado’s smallest including hummingbirds, lizards, and pocket gophers to some of the largest including black bears and elk.

Charismatic, but very rarely seen animals, include mountain lions, bears, and bobcats. Seeing a mountain lion or bobcat (at a distance) is a lifetime experience to be cherished. They are usually seen very early in the morning.

The following are descriptions of a few wildlife species observed on Lookout Mountain along with stories of wildlife encounters: 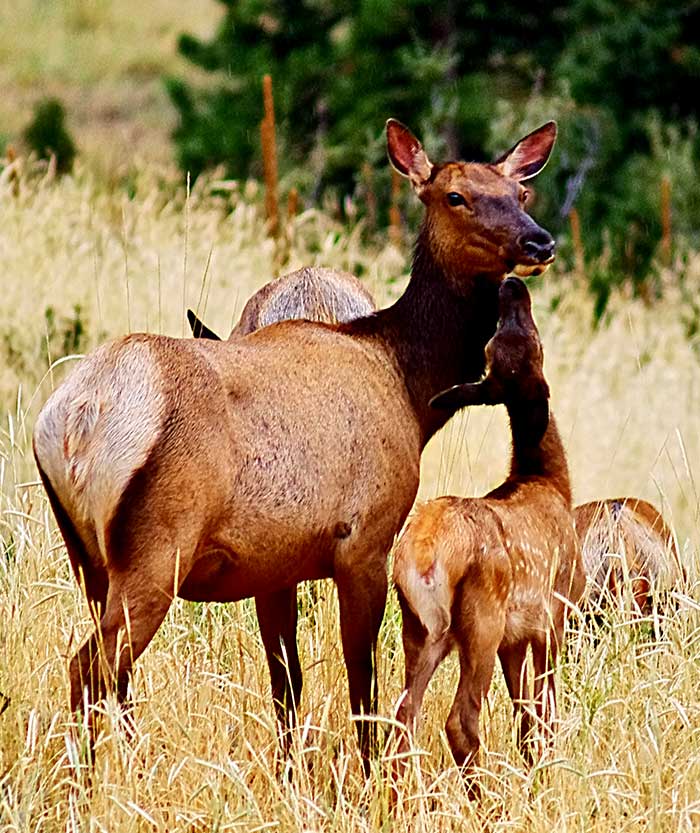 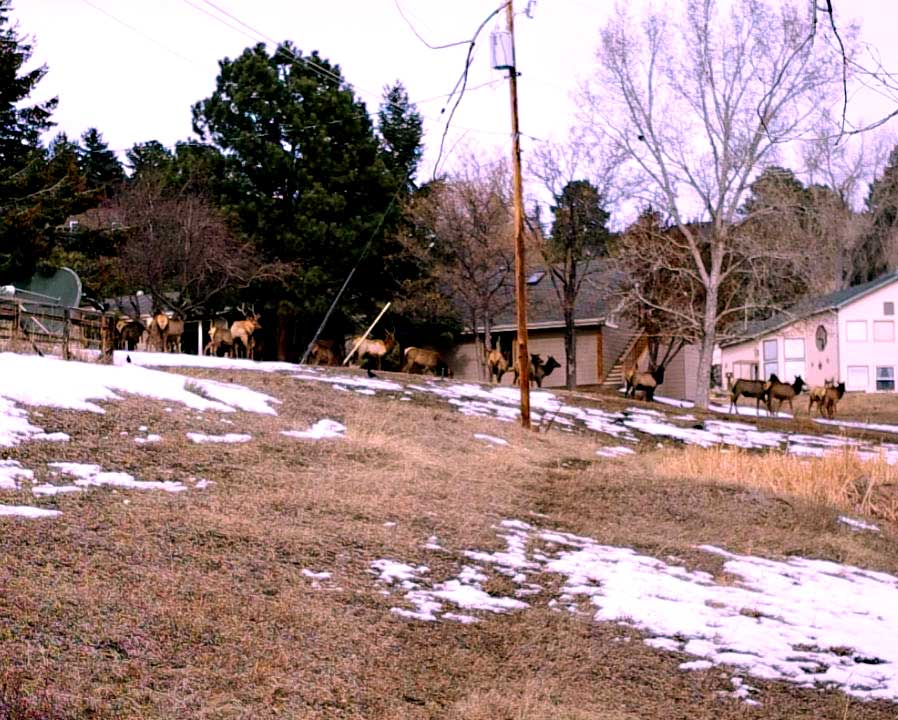 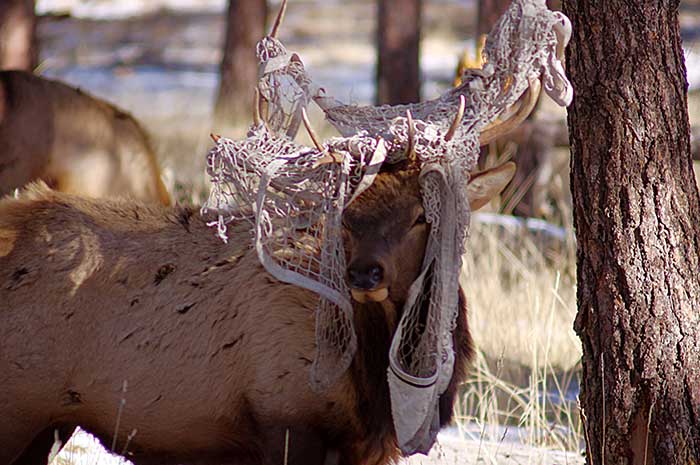 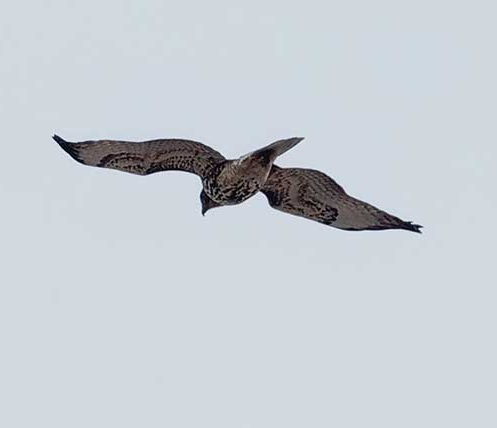 The frequency of mule deer on the mountain, along with their near total acclimatization to cyclists, pedestrians, and vehicles, makes them a collision hazard to be taken seriously. It is a rare ride when mule deer aren’t seen. At least one cyclist incurred serious injuries because of a deer near encounter. Fawns are common in the spring. Frequent cyclists are able to watch the fawns grow up during the summer and fall.

There are a few reports of cyclists encountering mountain lions but no one, to my knowledge, has reported being threatened or injured. Mountain lions usually disappear as quickly as they are spotted.

Perhaps the most interesting report of an encounter with a mountain lion is that related by a cyclist who found a driver’s license on the road one morning. Upon contacting the owner, he learned that the owner had been riding up Lookout in the dark early in the morning when he spotted a shadowy shape coming down the hill and joining him. Looking down with his headlamp, he found a mountain lion running along with him. They continued together for a ways, curiously observing each other. Then the mountain lion pulled ahead and disappeared. The cyclist stopped to call his wife to report his encounter and dropped his license on the road.

A mountain lion calmly walks across the parking lot at Pahaska Tepee. It is only few yards from its namesake, “Wildcat Point”.

Black bears are relatively common on Lookout Mountain but rarely seen by cyclists.

Ray Bolton, who holds many records on Lookout for perseverance, was riding down one morning when he spotted animals coming up the road towards him. His first thought was horses, then large dogs, and then he realized it was a black bear with cubs. He instituted a quick U-turn while falling off of his bike in the middle of the road. Getting up, he quickly placed his bike on the guardrail and jumped over. He promptly fell a good distance down the extremely steep side of Lookout Mountain. A bit bruised, it took him a while to find his way back up to the road via a game trail. Of course the bears were long gone by then.

Another bear was spotted by a group of cyclists as it ambled slowly up the road below Wildcat Point. They stopped to watch rather than riding by it and worried about oncoming traffic hitting the bear on the blind corners. Finally an impatient driver honked at the bear and it quickly ran up the hillside.

Ray Bolton is the only cyclist known to observe a bighorn sheep on Lookout. The sheep was on the road below Windy Saddle. Bighorns are occasionally observed on the north side of Clear Creek Canyon opposite the lower switchbacks.

Elk are often seen near the bottom of Lookout. During September and October, early morning cyclists will frequently hear the bulls bugling during the mating season. With luck, a cyclist might observe the big bulls jousting for the attention of the females. Elk are also acclimated to the presence of people. Riding around the top of Lookout through the residential areas and the Lookout Mountain Nature Center will often reveal the presence of large numbers of elk. They regularly occupy residential yards. On one occasion while riding around a residential area checking on the elk, there was a loud banging sound. Upon rounding a corner, a woman was seen beating on a large pan as she herded the elk out of her yard!

Golden eagles nest in Clear Creek Canyon. They often soar on updrafts along the lower switchbacks. If you are lucky, you may find yourself cycling alongside a soaring eagle in this area. The resident eagles in Clear Creek Canyon appear to get in aerial, territorial disputes with eagles from North and South Table Mountains near the mouth of the canyon. On one occasion, a soaring eagle dropped into the mountain mahogany shrubs along the lower switchbacks near a cyclist. After a brief flutter of wings, it emerged with a bullsnake in its talons. It flew back and forth near the switchbacks for a while with the dangling snake, apparently unperturbed by observers, as if it was showing off its catch.

Redtail hawks are the most common hawk seen on Lookout. They are frequently seen near the upper hairpins but are regularly seen from the bottom to the top of Lookout.

Kestrels, one of Colorado’s smallest and most colorful falcons, are frequently observed perching on poles near the bottom of Lookout. Once while riding up Lookout there appeared a ball of flying feathers in the middle of the road, not unlike what would be expected in a roadrunner cartoon. Upon approaching, a kestrel appeared from the ball of feathers flying in one direction and a collared dove appeared going in the opposite direction.

A merlin, another small falcon, is occasionally seen in the same area.

Several species of reptiles and amphibians may be observed while riding up Lookout Mountain (see list). Their populations crashed during the winter of 2006-2007. They are slowly recovering as of 2020. Unfortunately, most reptiles have a bad habit of warming up on the road when temperatures drop. The unfortunate result is that most observed reptiles are those killed by vehicles.

Spotted salamanders were occasionally seen near Lariat Spring prior to the population crash. They have not been observed there since. The larval form, also known as mud puppies, still exist in the Golden Reservoir water supply at the top of Lookout.

There are reports of people seeing poisonous coral snakes on Lookout. Coral snakes do not occur in Colorado. These are harmless milk snakes that have patterned color bands similar to coral snakes. Curiously, milk snakes are frequently seen dead but very rarely seen alive.

Prairie rattlesnakes are occasionally seen sunning on the road. Please leave them alone and they won’t bother you. They are beneficial and important predators and a natural part of the foothills ecosystem. There are always reports of large rattlesnakes being seen. They are likely harmless bullsnakes and protected by law in Colorado. Bullsnakes may perform a pretty good imitation of a rattlesnake when aroused. According to Colorado Parks and Wildlife, adult rattlesnakes average only about 28 inches in length.

A cyclist herds a reluctant rattlesnake from it’s sunny spot on the road to a safer location.