What is the route of the Lookout Mountain Hill Climb?

As with many undocumented pursuits in this sport, the exact ride has been debated between riders for years. This website will try to provide an acceptable description of the exact start and finish along with the distance and elevation gain. 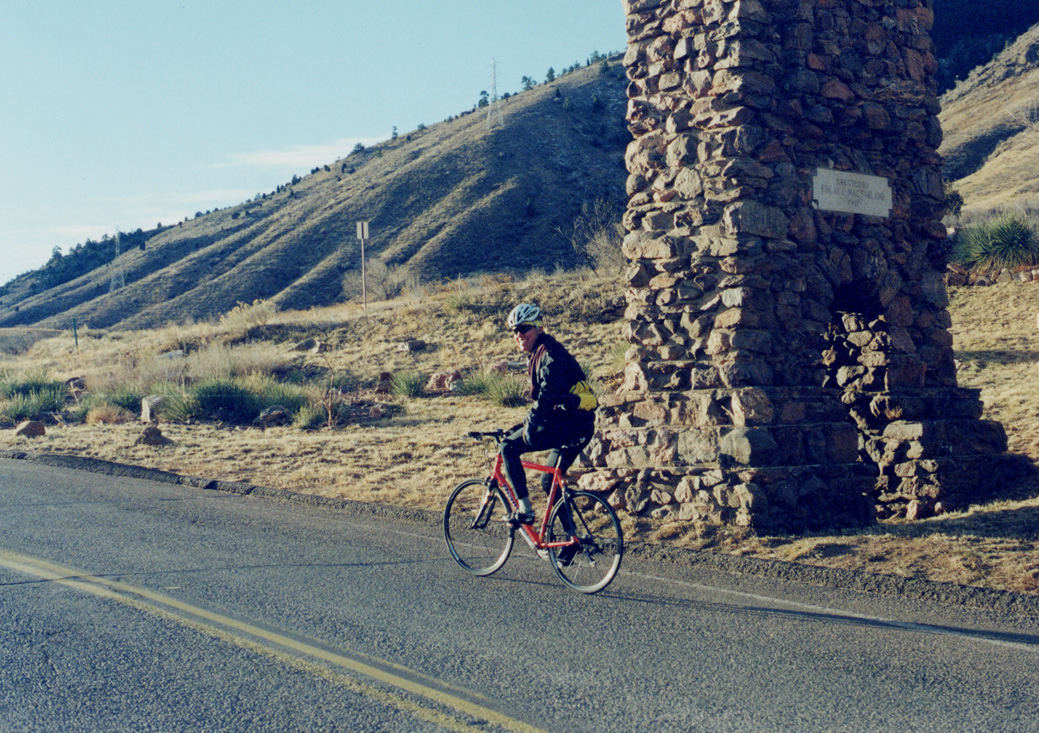 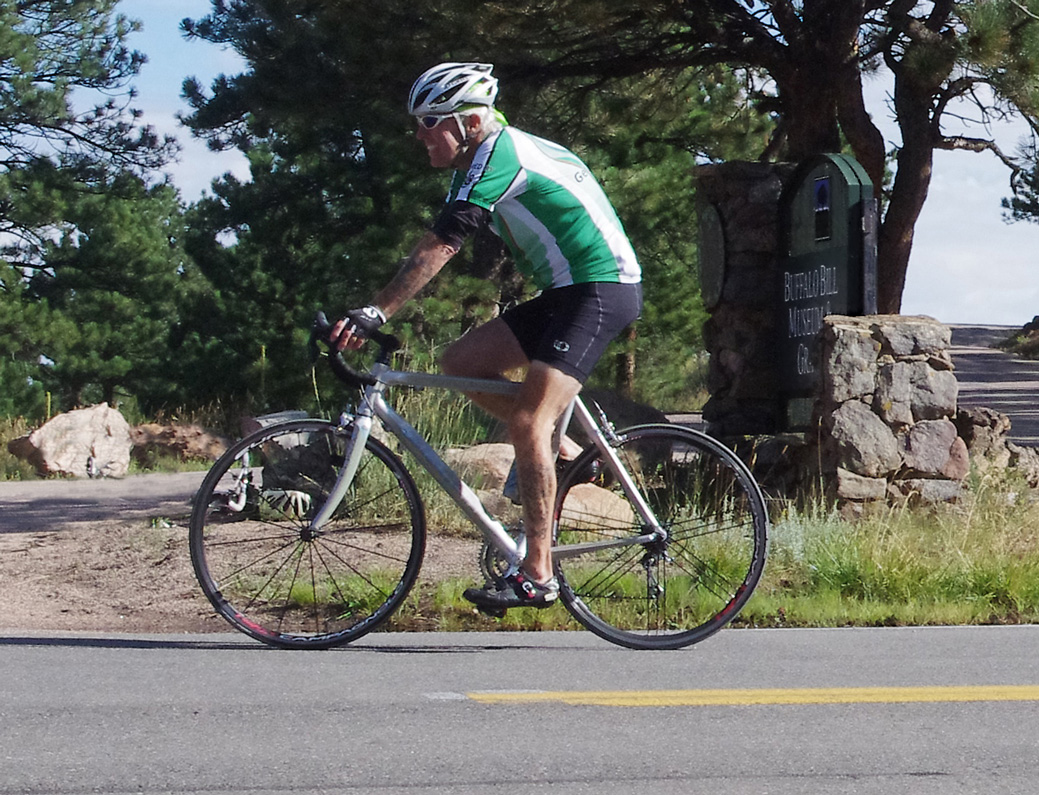 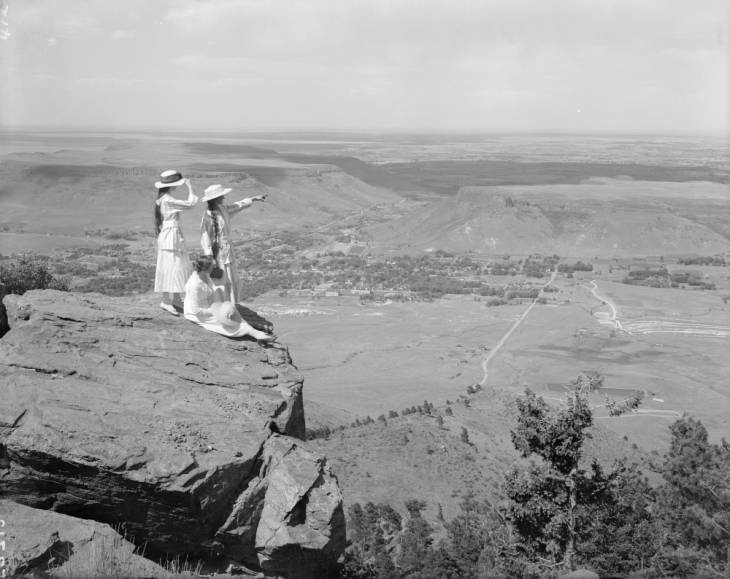 Wildcat Point provides a great view for three women, circa 1915. Table mountains and Golden are in the background. Wildcat Point is about 0.3 miles from the finish line (Post).

The Lookout Mountain Climb can be the beginning of the 40-mile long Lariat Loop Scenic and Historic Byway. Cyclists often begin and end their loop at the Finlay McFarland pillars (1917) due to the parking lot at Beverly Heights Park. This loop is an outstanding bike ride that includes Lookout as its centerpiece. Read more about the Lariat Loop.

The Classic Pillar-to-Post Hill Climb –
The Pillars (If timing, start your watch.)

This classic ride begins at the two stone pillars (one pictured at left) which are just uphill from the Beverly Heights Parking Area. The ride follows the winding, paved road 4.57 miles.

The finish is normally considered to be the sign in the middle of the intersection/turnoff to the Buffalo Bill Museum and Grave. In recent years the finish line of races was moved a short distance downhill to avoid blocking this intersection. The modification shortened the usual Lookout timing by a few seconds. In spite of the slightly shortened race course, most cyclists mark their times when they pass the sign just behind Ray’s back wheel in the picture at left.

Turning right here will take you to the Museum and the Pahaska Tepee gift shop and restaurant. The actual summit of Lookout Mountain is marked with a USGS benchmark slightly southwest of Buffalo Bill’s grave.

The climb from the Pillars (just uphill from the Beverly Heights Parking Lot) to the Post (the center of the intersection and sign to Buffalo Bill’s) is 4.57 miles long with 1286 feet elevation gain. The average grade is 5.3%.

The elevation of the Pillars is 6043 feet. At the Post, the elevation is 7329 feet.The elevation gain from the intersection of 13th Street and Washington Street in Golden is 1652 feet. The climb from Golden distinctly begins one block west at 13th and Arapahoe with a gain of 1641 feet. Use the landmarks of your choice.

(The distances and elevations were measured on a Jefferson County aerial photo available at https://www.jeffco.us/739/Mapping-GIS. The high-resolution, one-foot elevation contours on the map were created using LIDAR mapping. These mileages and elevations are in good agreement with those derived from Google Earth Pro images.)

Today’s bike climb up Lookout Mountain is on a paved road. It is much easier than when cyclists climbed the steep, rough, Chimney Gulch Wagon Trail from the late 1880’s until Cement Bill (William Williamson) built the present road in 1913 – 1914. His new road wasn’t paved until the 1930’s.

By comparison, if you were to climb the 1286 feet of elevation gain along the old rocky wagon trail up Chimney Gulch (a more direct route than even the present day hiking trail) to a point near the Post, the horizontal distance is about 1.9 miles. That average grade of that approach is a steep 13 per cent.

Remember these historic scenes the next time you ride lookout! 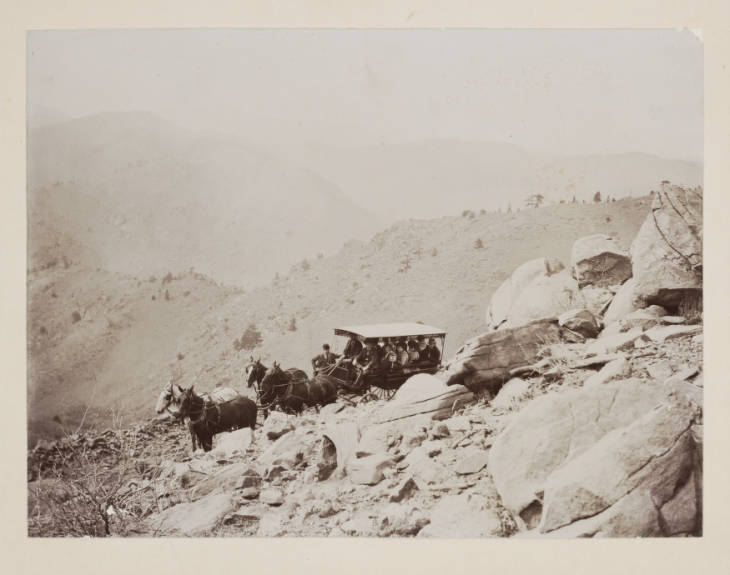 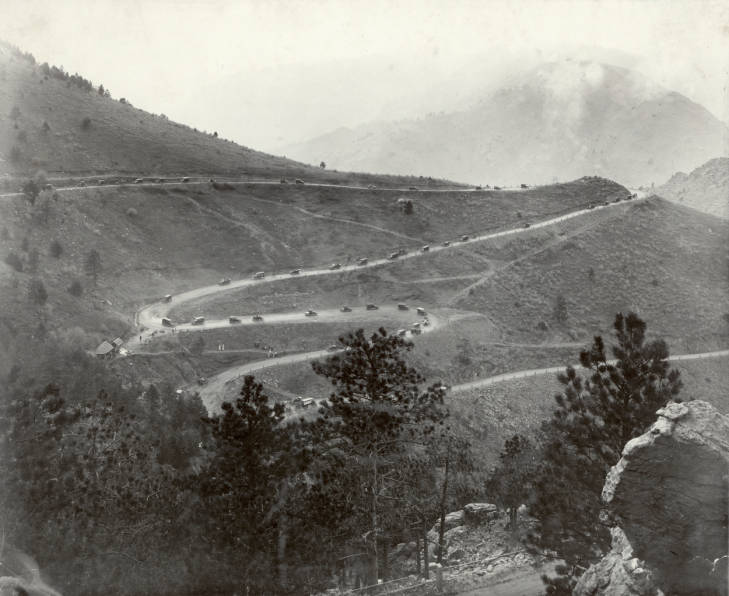 When Cement Bill replaced the wagon trail with a graded, unpaved road, Lookout Mountain became a popular destination. The name “Lariat Loop” originally applied to the Upper Hairpins which were also known as the “Engineers Lariat”. 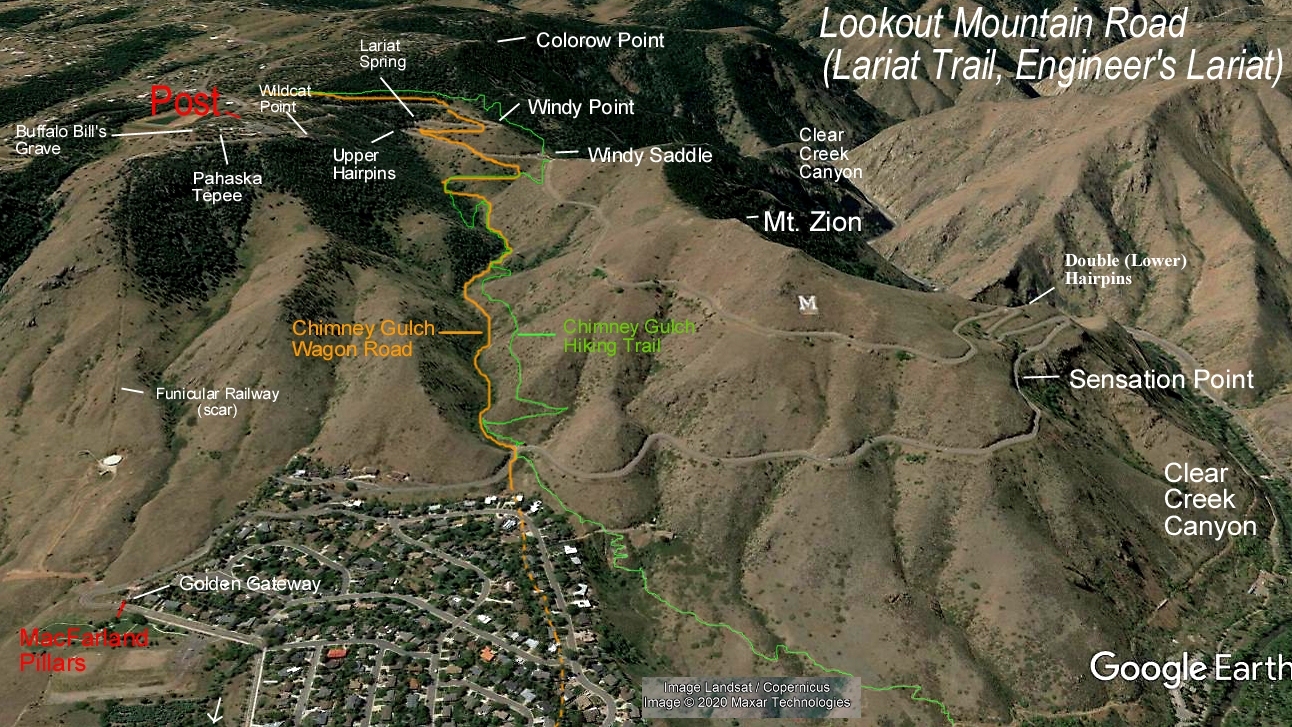 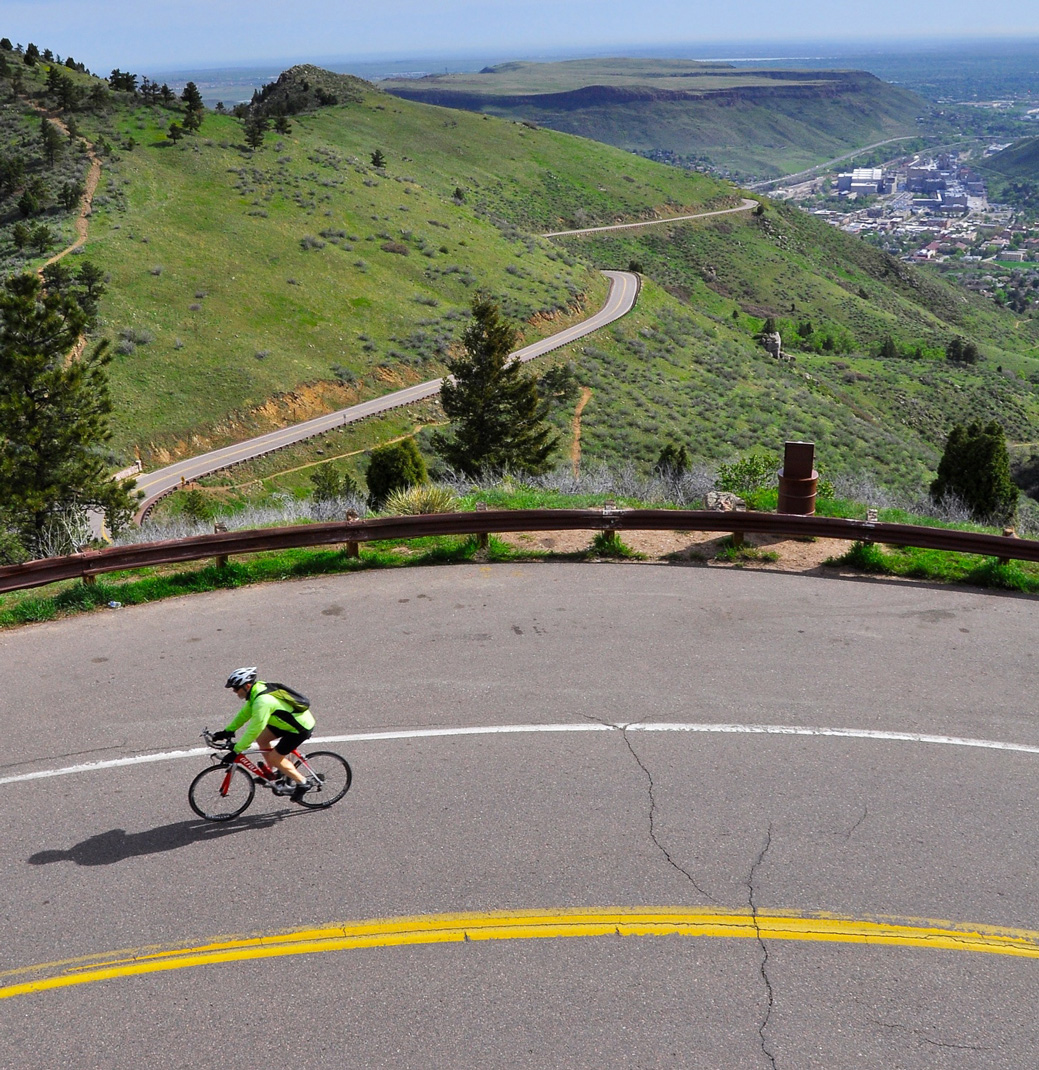 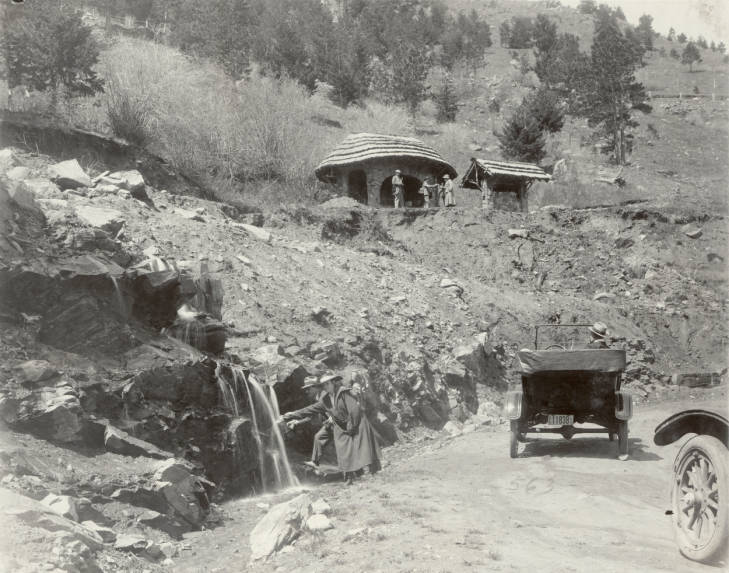 The springhouse at the Upper Hairpins provided fresh water for people and overheated vehicles. After years of neglect and vandalism, most of the springhouse was removed several years ago.

This map shows landmarks along the road that may be of interest to cyclists. Each has mileage measured from the Pillars. Several have elevations. 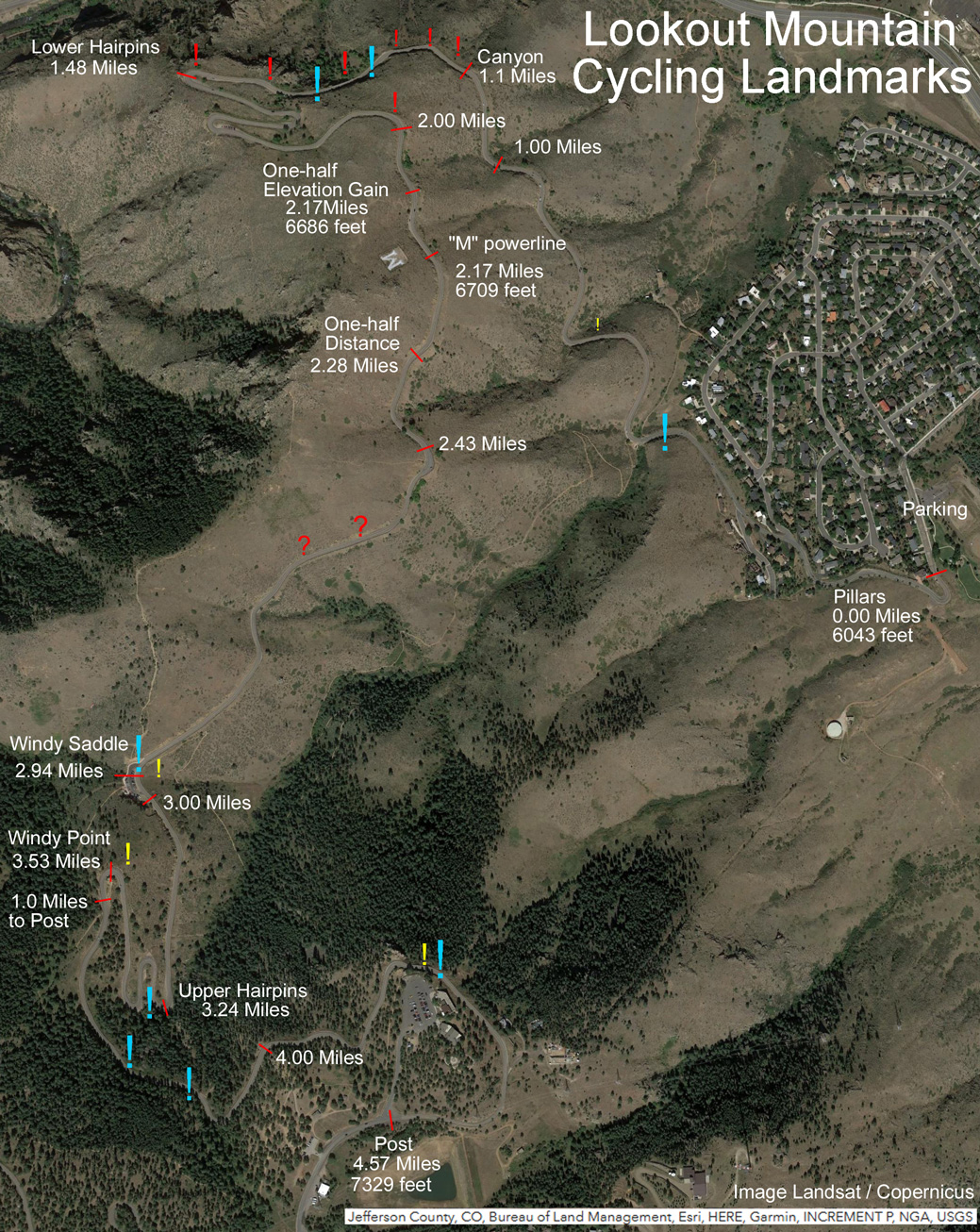 Exclamation points (!) on the map show areas where windy conditions may be encountered. The highest winds are usually westerly. Depending on conditions and prevailing wind direction, other areas not shown may be dangerous.

The power line that crosses the road near the “M”

Several cyclists, with a combined 14,000 trips up Lookout, agree that one-half of the effort appears to be near the power line that crosses the road to light the “M”. When a cyclist is riding with a consistent effort and a determined finish, times for the splits before and after the power line are comparable. This is also described in the Consistency Challenge.

If you haven’t ridden Lookout before, be aware that extremely high winds may be present. Windy Saddle and Windy Point live up to their names but other areas (especially the north side of the route overlooking Clear Creek Canyon) also often experience high winds.

Theoretically, under ideal conditions with no wind or other resistance and riding at a constant effort/power output, one-half the elevation gain would be close to one-half the effort. Unfortunately riding speed determines wind resistance. Energy expended due to wind resistance increases as the cube of the speed wind. Therefore the point at which a cyclist produces half of their total energy on the climb will vary with the speed of the cyclist. Riding faster consumes proportionally more energy from Pillar to Post. Kudos to the slow riders for being the most efficient! 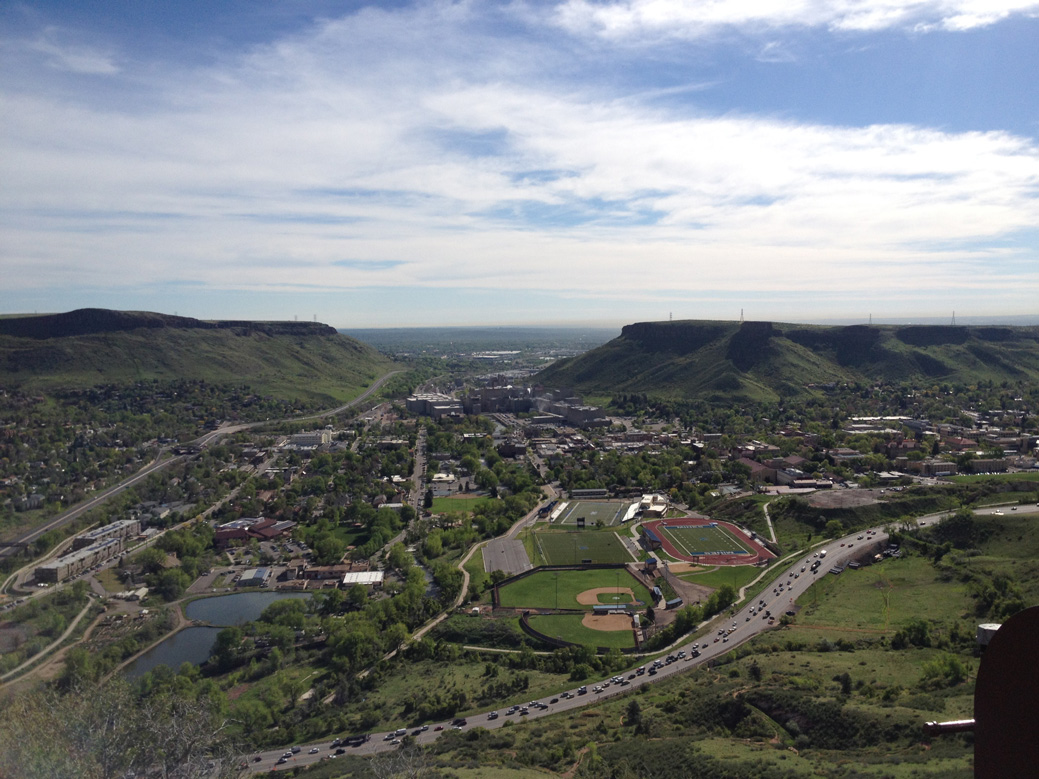 The Denver Municiple Facts described the landmarks along the Lariat from the viewpoint of a motorist in 1918:

“From Golden, the second capital of Colorado, the road ascends Lookout Mountain on an incline. The table mountains that shut Golden from the prairies seem to sink until they appear to be insignificant foothills…Soon the road turns westward into the mountains and crosses the face of a shear cliff. Seven hundred feet below murmurs Clear Creek, where first gold was discovered in Colorado. The road here was blasted from solid granite, but a dangerous slide carried the roadbed away as fast as it was cleared. The engineers dammed the mountainside by throwing a concrete wall across the treacherous spot and anchoring it to solid rock on either side. This is Sensation Point. Just beyond, the first of two remarkable double hairpin turns is negotiated. By successive stages the mountain climbs to Windy Saddle, a pass thirty feet wide, which drops on one side into Clear Creek and on the other into Chimney Gulch., ascends the Upper Hairpin on its five levels on a transverse axis of two hundred and fifty feet; encircles Windy Point and swings around Wild Cat Point. Here he gains the most magnificent view of the plains from the summit of an abrupt cliff. Two thousand feet below Golden spreads out like the toy village of one’s childhood…The motorist has reached the summit of the famous Lariat Trail, which winds and loops below him…” 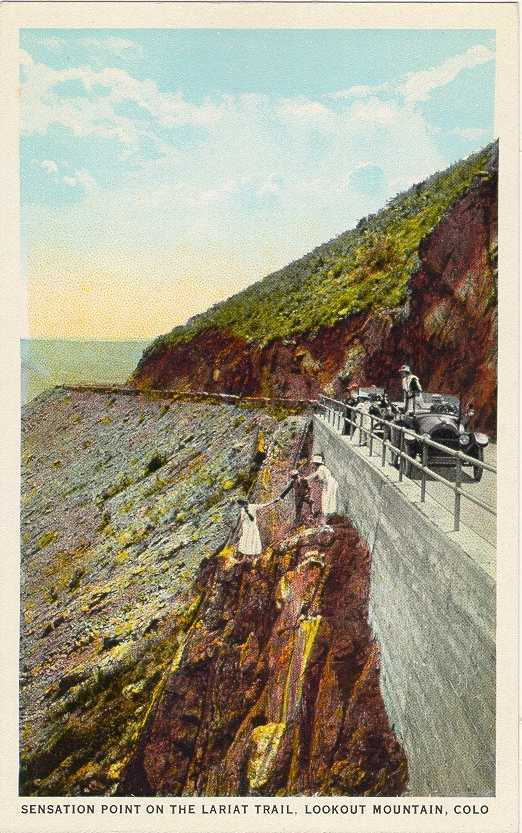 Sensation Point was a popular viewpoint along the Lariat Loop in Clear Creek Canyon. Look closely at the colorized photograph. You may notice where the artist made some liberal interpretations of the truth. 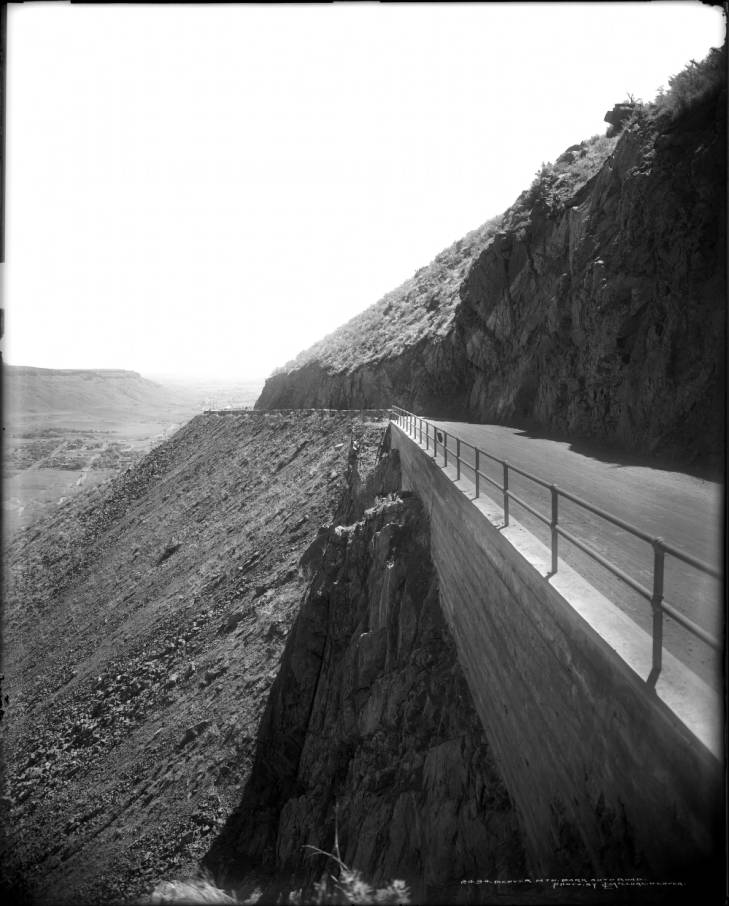 The new Lariat Road is only a few years old. Compare this view with the previous and following. Is this the view that was colorized? 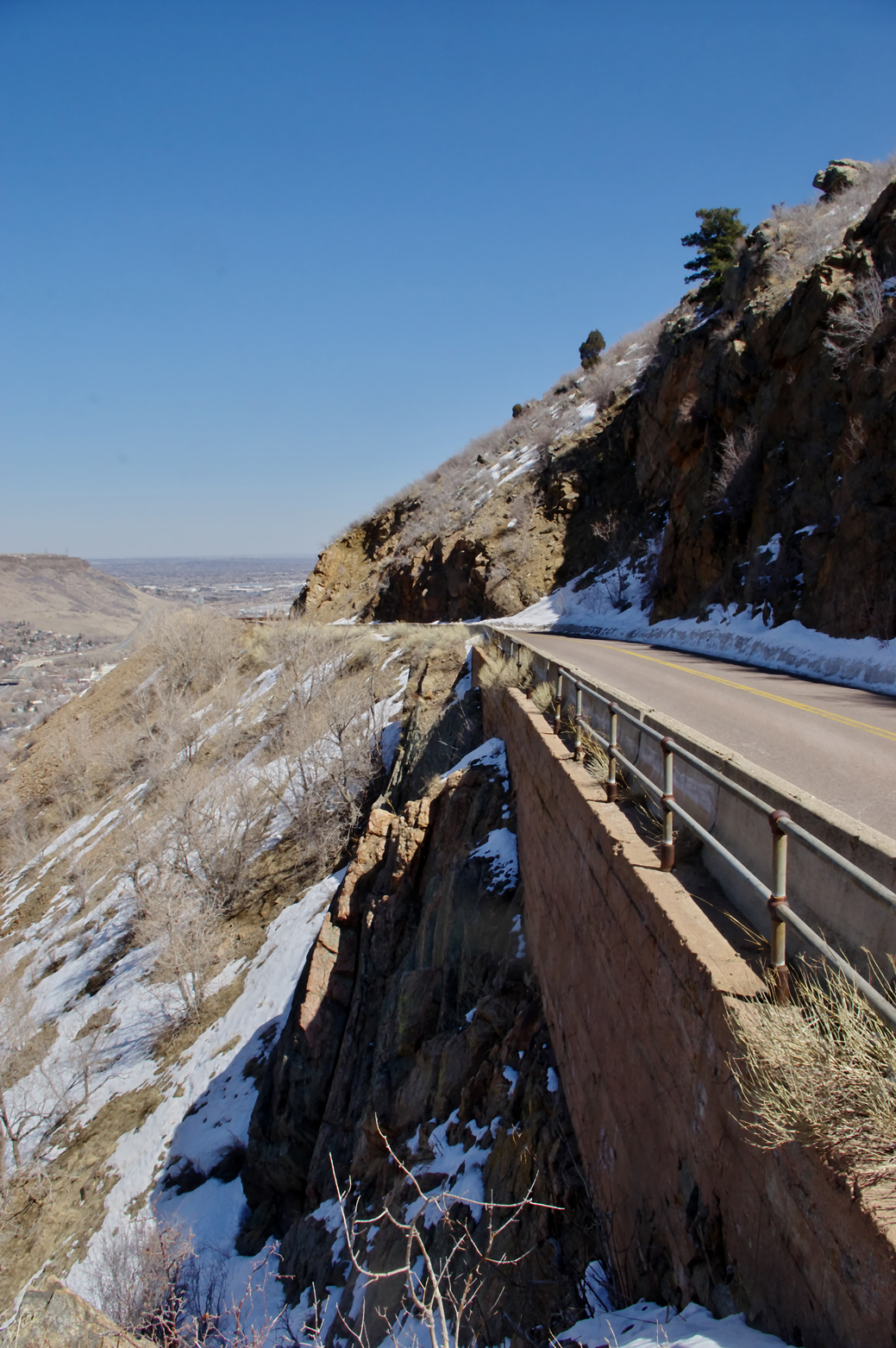 The view is easily recognizable as the 1916 view. A concrete retaining wall has been added. There are many more shrubs and small trees. The steep hillside in the distance has eroded considerably. That area likely experiences frequent rockfalls.

Safety and Hazards on Lookout Mountain

The climb up the hill is enjoyable as long as you are aware of the hazards and follow a few rules. Take a look at information about the hazards and rules on the safety page.