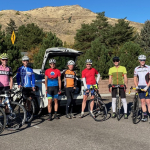 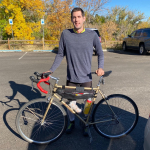 David W. is in the minority. He is a native Coloradan who cycles Lookout Mountain. He did go out of Colorado to get his mechanical engineering degree at Rose Holman college in Terra Haute, Indiana. He started riding at about 30 years old and has five years on his Salsa bicycle under his belt. This day he was joining the Rocky Mountain Cycling Club (first picture) for a ride up toward Witter Gulch. He also has a mountain bike and has given it a trip (on two efforts) across the 485 mile Colorado Trail. He first rode from the front range to Frisco. The second continuous effort was from Frisco to Durango. He allowed ten days and was a bit surprised that he needed to walk his bike so much. He did go eight days without seeing someone heading in the same direction that he was.

Just a note: I will be heading out of town for six days and will start a new string when I return. I hope to have enough profiles by tomorrow to keep the information flowing until next Monday.