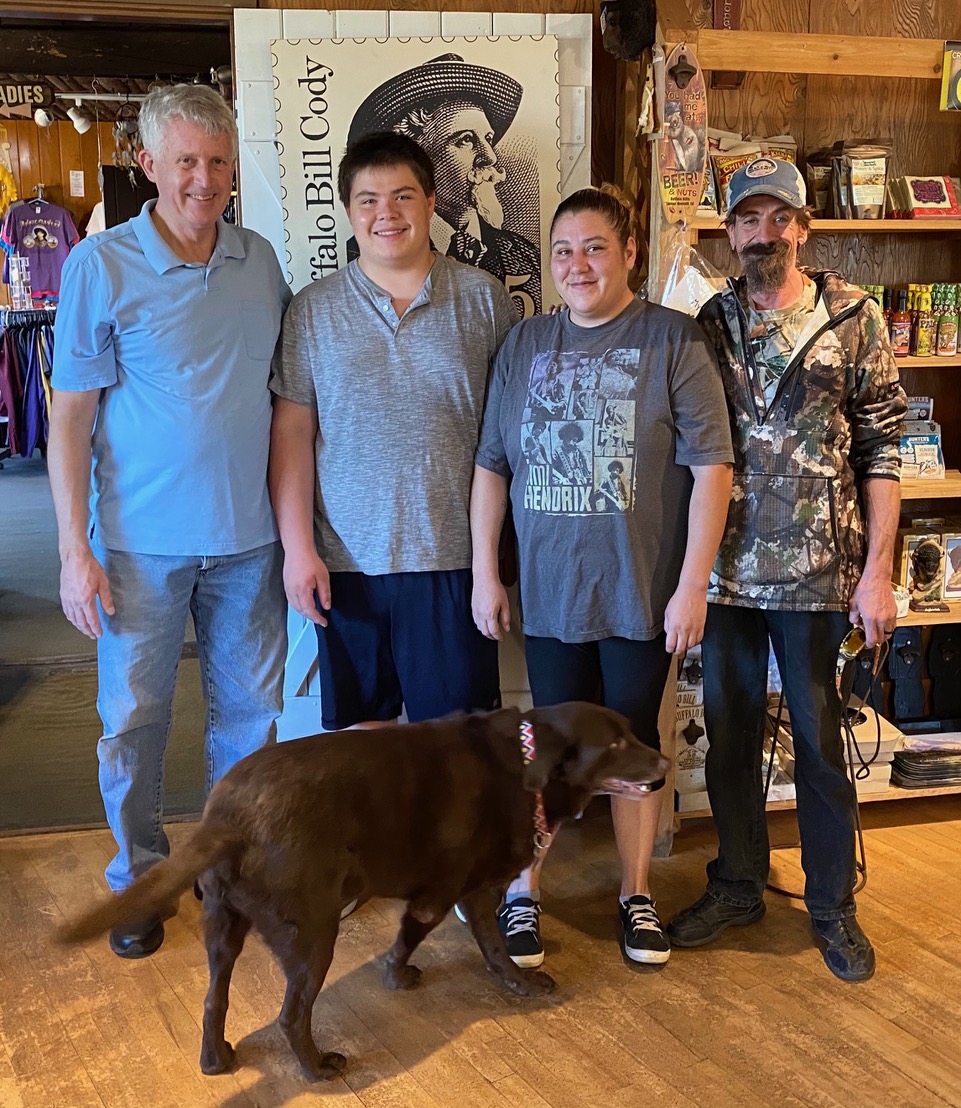 This is sort of a family picture. Everyone here pretty much has adopted each other…..and that includes Chocolate Chip, the l
Labrador Retriever at the bottom of the picture. The fellow on the left is Bill Carle. His family has had gift shops/snack bars at the entrance to Rocky Mountain National Park, Grand Lake, the top of Pike’s Peak, Red Rocks Amphitheater, Echo Lake at the base of Mount Evans and, I think, Garden of the Gods- just to name a few. He has stories that could easily fill a book about living at the top of Pike’s Peak and rescuing stranded and injured hikers and climbers. Just last summer he organized an electric bike ride to the top of Mount Evans. The six person group helped evacuate a novice hiker who had taken the trail to the top of Evans and was without a flashlight, food, warm clothes and a proper cell phone to contact anyone to help him get off the summit. The temperature had dropped 30 degrees to the low forties at sunset and the road was closed to cars because of CoVid. As I said, Bill has some stories.

The other three are Isaiah, Geraldine and Bill Schafli. Bill and Geraldine met while working at Echo Lake at the base of Mount Evans for Bill’s also story-laden sister, the warm and wonderful Barb Day. Geraldine and “Skinny” Bill adopted Isaiah eleven years ago and have been a tight, very giving family ever since. They all can be found at different times at Pahaska Teepee, the gift shop and restaurant at the top of Lookout Mountain adjacent to the Buffalo Bill Museum.

Chip has been on a diet most of his adult life, but he is the official greeter and also official- but unelected- Mayor of Lookout Mountain.

(Just for the heck of it, Bill Carle bought an amphitheater that can seat just about as many people as Red Rocks that borders the Lake of the Ozarks in Missouri and is managing summer concert seasons there in his spare time).