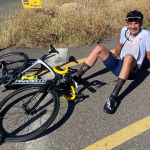 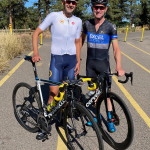 From Friday, 9/24/2- There are many cyclists who ride to the limit of their abilities as they try to climb Lookout Mountain. And many of those riders are so focussed on their riding that any socialization is out of the question. Not these two (at least after the maximal effort). Alvin Nordell on the left and Kevin Nicol are outstanding riders and professionals in their cycling fields. Thirty nine year old Alvin works for cycling apparel manufacturer Castelli and 54 year old (seriously?..54??) Kevin is a physiologist who has won the pro race up Mount Evans (the Bob Cook Hill Climb) in (get this)- 1:54. During this climb Alvin was trying to break his PR of 20:01. He thought that he was eight seconds over that mark. Kevin was pretty sure that he had beaten the old standard. It was easy to see that it was an all out effort (first picture) and that the two of them have posed for cycling pictures in the past (second picture). They are two of the friendliest dudes (as Megan Hottman calls them) that I have met riding the mountain. Thanks, guys for taking the time to chat and pose for the pictures.

The Denver Century was routed up Lookout Mountain on this Saturday. It could be that many of the riders in the 100 mile effort were riding Lookout for the first time. Early on, the cycling traffic was heavy, but it had thinned out when I rode later in the morning.