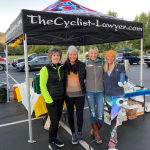 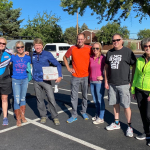 Megan Hottman (thecyclist-lawyer.com)- the woman in the second picture toward the left in the boots (and jeans she has been wearing since childhood)- has been organizing cyclists and her friends to socialize for a least ten years now. Often it takes the shape of a series of rides up Lookout Mountain during the week of the summer solstice. She also organizes an aid station at Maple Grove Park on 32d Street east of Golden for the the Bike to Work effort (which was moved temporarily this year to September instead of mid-summer). She is the very organized queen of cycling socialization. Due to the timing, the aid station was not so busy this year- except for the people working the aid station. We all had a great time. But she has a lot of leftover cookies and cupcakes to eat in the next few weeks. If you are her friend and you have young children, be suspicious if, after she visits your house, your children are walking upside down on the ceiling. SUGAR OVERLOAD………. Oh, and I really enjoyed the t-shirt with the big print. Many cyclists have asked that question- even after serious accidents. Ray Bolton definitely did after missing a deer on Lookout and landing face first on the pavement.